Story By: HOLLY CAIN / NASCAR – DAYTONA BEACH, FL – Less than a month after Denny Hamlin celebrated his Daytona 500 crown in the sport’s most famous victory lane, Daytona International Speedway has announced major adjustments to the traditional 2021 NASCAR Cup Series season-opening race week – changing up the course of the popular Busch Clash race and condensing the schedule of Daytona Speedweeks.

Next February the annual Busch Clash race will kick off the on-track action under the lights on Tuesday, Feb. 9, and instead of racing on the Daytona 2.5-mile high banks, stock cars will compete on the track’s famed road course for the first time. 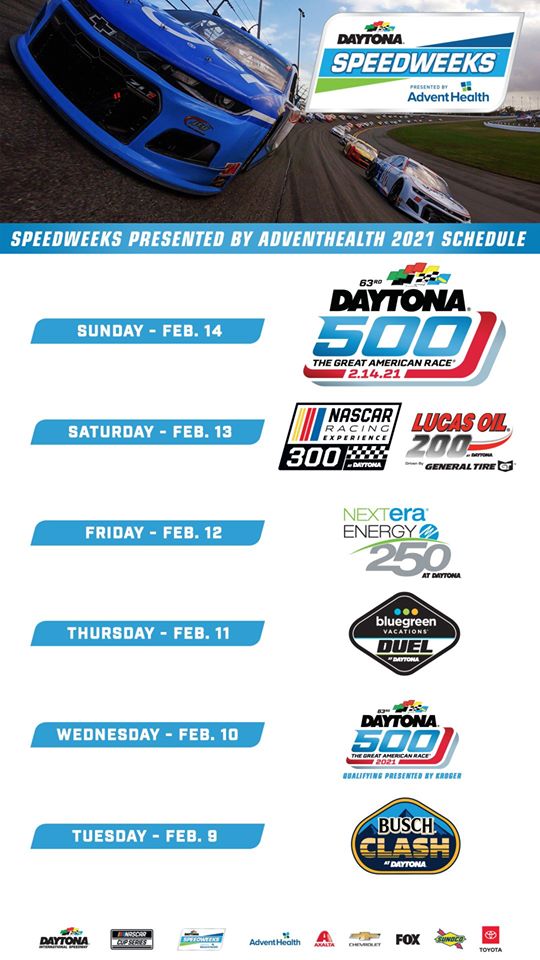 “We continue to look for opportunities to differentiate the Busch Clash from the Daytona 500 and obviously everything we do around Speedweeks Presented By Advent Health is about building toward the 500,’’ Wile said. “This is about how we can continue to push and elevate the Busch Clash to be something different. And we’ve done that with a lot of new initiatives the first weekend.

“We’ve seen growth year over year with the Busch Clash and that weekend, but to see the resurgence in road course racing and the excitement around it from the fans, we thought, why can’t we do this,’’ Wile added.

The road course at Daytona is best known for hosting IMSA’s season-opening Rolex 24 At Daytona, as well as the DAYTONA 200, North America’s premier races for sports cars and motorcycles, respectively.

“The famed road course at Daytona has a long and storied history with sports cars and motorcycles and now we can write a new chapter on it with stock cars,’’ said NASCAR’s Vice President of Racing Development Ben Kennedy. “Fans coming to the track will get to see six consecutive days of exciting NASCAR action, with no days being the same.’’

The new schedule and new venue is just another example of NASCAR’s willingness to be open to ideas and enhance what is already viewed as the highest profile week in stock car racing.

The action-packed six-day schedule for 2021 Speedweeks will now start with the Busch Clash road course event on Tuesday, Feb. 9 and culminate with the Daytona 500 on Valentine’s Day – Sunday, Feb. 14.

Saturday, Feb. 13, will become a double-header with the NASCAR Xfinity Series season opener and the ARCA Menards Series Lucas Oil 200. Then “The Great American Race,” the Daytona 500, will take place Feb. 14, putting an exclamation point on the week of speed.

The change in course for the Busch Clash adds a new dimension to NASCAR’s opening week and certainly provides a new viewing opportunity for fans, who can watch the race from Daytona’s famous infield as well as the grandstands.

“NASCAR fans have asked for more road-course competition and the industry is listening,’’ Wile said. “With the talent level the Busch Clash brings to the table, the race will now clearly have its own look and feel during Speedweeks in 2021.

“The new placement on the Speedweeks schedule also adds to the anticipation. That switch will make for a fuller Speedweeks calendar. Fans also will have the opportunity to engage in a festive infield atmosphere similar to the Rolex 24 at DAYTONA.’’