RPW Column By: PHIL SMITH / RPW – WESTERLY, RI – When the Tri-Track Series rolled into the Stafford Motor Speedway last Saturday it brought back fond memories of the first Spring Sizzler in 1972 when Dick Berggren, Bruce Cohen and Lew Boyd put their heads together to create what is now considered “The Greatest Race of the Spring”.

Fast forward to 2020, The first visit to Stafford could very well be considered the “Greatest Race of the Fall”.

Tons of Modified Race cars, (51 ) a huge purse paying $10,000 to win plus contingencies and a packed house with all the law would allow. The event was co-promoted by Ed Bennett and Wayne Darling. On April 25, 2004, Jerry Marquis scored victory in the NASCAR Whelen Modified Tour Spring Sizzler 200 at Stafford Speedway.

It marked the last time a Tour Type Modified event at the Arute owned facility attracted an entry list eclipsing 50 cars. Fifty-four cars showed up that day at Stafford Speedway looking to make a 33-car field. Names like Tom Baldwin Sr., Ken Bouchard and Mike Christopher Sr. were part of a group of 21 drivers that didn’t make the feature that day.

With 51 cars on hand to qualify for 32 starting positions, there was also a 25-lap B-Main feature that sent the top-2 finishers to the main event and paid a purse of nearly $10,000 to the non-qualifiers. Chase Dowling held off Matt Hirschman through a host of mid-race restarts before pulling away from the field in the closing laps to win the race and the $10,000 payday. Noah Korner won the B-Main and Dylan Izzo finished second to advance into the CBYD 81 main feature.

The Call Before You Dig 81 took the green flag with Ronnie Williams going outside Burt Myers to take the early lead. Ryan Preece went from fourth to second on the start with Chase Dowling taking third. Myers moved into line in fourth, just in front of Woody Pitkat. Pitkat got around Myers to take fourth place on lap-4 and Keith Rocco took fifth on lap-5 as Myers was sliding backwards to ninth place. Dowling took the lead from Williams on lap-12 just before the caution came out for Marcello Rufrano who spun into the front stretch grass.

Dowling took the lead back under green with Williams, Pitkat, Preece, and Tommy Barrett, Jr. lined up behind him. Matt Hirschman was up to sixth place and he took fifth from Barrett on lap-15 while up front, Pitkat and Preece both got by Williams to move into second and third. Preece took second from Pitkat on lap-20 while Dowling was starting to stretch out his advantage up front. With 25 laps complete, the running order was Dowling, Preece, Pitkat, Hirschman, Williams, Doug Coby, Joey Cipriano, Barrett, Jon McKennedy, and Michael Christopher, Jr. The caution flew with 30 laps complete for a spin in the middle of turns 3+4 by Noah Korner. Under the caution period, most of the field of cars came to pit road for service. The cars that stayed out were Preece, Coby, Christopher, Eric Goodale, Dylan Izzo, and Matt Swanson. The order for the restart was Preece and Coby on the front row, Christopher and Goodale in row 2 and Izzo and Swanson in row 3. Several cars piled up on the restart in turn 1 involving Marcello Rufrano, Dave Etheridge, Matt Galko, Anthony Sesely, Brian Robie, and Ryan Doucette, while on the backstretch Jon McKennedy and Woody Pitkat came together and collected the car of Sapienza to bring the red and yellow flags out as Pitkat’s car was pinned on its side against the backstretch wall.

Preece took the lead on the restart with Christopher in second. Izzo was third but on lap-32 Dowling went 3-wide with Izzo and Swanson to move into third and then he took second from Christopher. Izzo got into the backstretch wall on lap-37 and he limped back to pit road but his car came to a stop just at the entrance to pit road to bring the caution out. Swanson spun on the restart coming out of turn 2 to bring the caution flag right back out. Goodale spun on the front stretch to bring the caution out again before a lap could be completed on the next restart. The third restart saw Dowling power his way around Preece in the outside lane to take the lead. Hirschman followed suit and moved into second with Joey Cipriano taking third, Ronnie Silk fourth, and Christopher fifth. Preece slid back to sixth place but he would lose that place to Williams on lap-41. Rufrano spun in turn 3 with 45 laps complete to bring the caution out.

Dowling took the lead on the restart with Hirschman in second. Cipriano was third followed by Silk and Williams but the caution came back out with 46 laps complete as Preece and Coby both got into the turn 3 wall and were done for the night. Dana DiMatteo was black flagged and parked for the remainder of the race by Tri-Track officials for making contact with Preece and Coby.

Hirschman and Dowling went side by side for the lead for 2 laps after the restart with Dowling getting clear to the lead on lap-49. Cipriano was third in line followed by Silk, Williams, Korner, Owen, Goodale, Rufrano, and Pasteryak. The caution came back out with 52 laps complete for a spin by Pasteryak in turn 4 that also involved Rufrano.

The restart was called back by officials and the second restart saw Cipriano spin through the front stretch grass to bring the caution right back out. The next restart saw Dowling again take the lead with Hirschman right on his bumper for 2 laps before Korner spun in turn 4 to bring the caution back out with 60 laps complete. Dowling shot back into the lead on the restart with Williams pulling alongside Hirschman for second. Justin Bonsignore was up to fourth and Swanson and Goodale were side by side for fifth place. Williams was able to clear Hirschman for second on lap-63 while Goodale’s car dropped off the pace and he pulled behind the pit wall. This made the running order Dowling, Williams, Hirschman, Bonsignore, and Swanson with 18 laps to go.

With 5 laps to go it was still Dowling in command with Williams, Hirschman, Bonsignore, and Swanson giving chase. Hirschman and Williams were fighting hard for second place, which was allowing Dowling to slowly build up a lead lap by lap as the field closed in on the checkered flag. Dowling led the field to the checkered flag to win the race and the $10,000 payday that came with the victory. Williams finished second with Hirschman, Bonsignore, and Swanson rounding out the top-5. Sixth thru tenth included Richard Savary, Les Hinckley, Todd Owen, Ronnie Silk and Burt Myers.

Dowling, the driver of the No. S&S Asphalt Paving machine owned by Ben Dodge, rolled to a dominant win in the inaugural Tri Track Open Modified Series race at the Connecticut half-mile. The race win came with a smooth $10,000 check courtesy of CBYD and Tri Track — just a small portion of a purse that was over $58,000. Thirty-two cars started the race, while 51 Modifieds showed up in the pit area to attempt to qualify. It was the largest, and most talented, Modified field seen in a race in multiple decades of racing. While Dowling celebrated the victory, Hirschman clinched his fifth career Tri Track title driving the No. 60 Modified.

The major wreck of the race happened off turn two on lap 30, just after the cycle of controlled caution pit stops. After Doug Coby had a mechanical failure at the green flag and stacked up the outside lane, multiple cars wrecked, drawing a caution in turn one. It was in turn two where most of the carnage happened — with Woody Pitkat ending up halfway up the wall on his side. Pitkat, Jon McKennedy, Dave Sapienza and others escaped without injury, but were sidelined for the rest of the race.

The event was deemed a rousing success in all aspects including car counts, grandstand occupancy and Pay per View audience

The New London Waterford Speedbowl was back in action with their three day event The Fall Finale. Keith Rocco didn’t have a good day at Stafford on Saturday as he finished dead last on the Tri-Track event but he more than made up for it on Sunday as he won the 75 lap SK Modified main event that closed out the racing season at the shoreline oval. Rocco continued to build on his record setting feature win total. Rocco brought his track win total to 153 wins, 92 of those in an SK Modified. Rocco also has 49 career Late Model victories, four Limited Sportsman division wins, four Valenti Modified Racing Series victories, two Truck Series wins, one Pro Four Modified win and one NEMA Lite win during his career at Waterford. The win also took Rocco over the top to a career overall total of 292 wins which, in addition to the 153 at the speedbowl also include 65 at Thompson and 74 at the Stafford Speedway.

Todd Owen was second and Andrew Molleur, third. In some late race drama when Molleur was leading with Owen on his tail, the two made contact on a lap 71 restart. The resulting jingle sent Owen up the track, opening the door for Rocco to close on Molleur’s tail. Rocco executed a pass for the lead one lap later. One final caution waved with one to go which resulted in a green – white -checker finish. Rocco was first under the checker. Tim Jordan recorded a 10th place finish in the 75-lap SK Modified feature to clinch his first SK Modified championship at the track.

The Riverhead Raceway continued their Saturday night racing program. Last season NASCAR Modified talent CJ Lehmann went on a late season hot streak at Riverhead Raceway winning two of the final four NASCAR Modified feature events at the track. History just might have a way of repeating itself as on Saturday night CJ won the second to last 50-lap main event of 2020. It was Lehmann’s first win of the delayed season third overall of his career.

Riverhead Raceway owners Eddie & Connie Partridge and Tom Gatz figure there is only one way to send off the challenging 2020 race season into the sunset and that is in spectacular fashion as they announced plans for the 4th annual Islip 300 Saturday November 14th. The Partridge and Gatz ownership team are also happy and excited to announce that East West Marine Services has signed on to be the title sponsor of the $32,650 Tour Type Modified extravaganza that rewards the winner with a $7,000 payday.

The all new book, The Modified Years At Stafford, is gaining interest and has become a must have in race fans and competitors library. Race by Race, Year by Year, it’s all there. Read all about it in the all new book. Books are now available on Amazon.com and Coastal181(877-907-8181 toll free) and are available thru Stafford’s web site in their store. Order yours now. 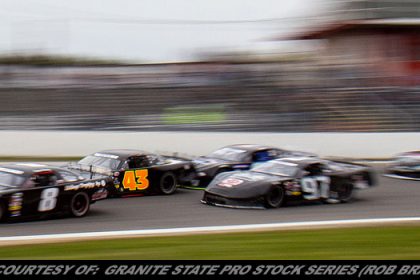